John Wesley: The Original Design of the Methodists 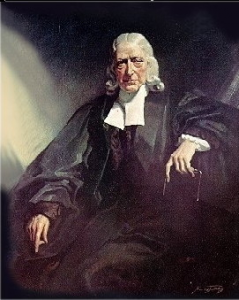 Afterwards I met the society, and explained to them at large the original design of the Methodists, viz., not to be a distinct party, but to stir up all parties, Christians or Heathens, to worship God in spirit and in truth; but the Church of England in particular; to which they belonged from the beginning. With this view, I have uniformly gone on for fifty years, never varying from the doctrine of the Church at all; nor from her discipline, of choice, but of necessity: So, in a course of years, necessity was laid upon me, (as I have proved elsewhere,)

And, in a few other instances, to use such means as occurred, to prevent or remove evils that we either felt or feared.

What John Wesley Actually Said About the Bible

John Wesley saw the Methodist movement as a return to the original life & faith & experience of Christianity. He wanted to return to the faith of the apostles and the early church — to find that same dynamic quality of faith and life that the early Christians had. So, Scripture had a place of central importance in Wesley’s teaching and preaching.

In Wesley’s view, devotion to the teachings of the Scripture is absolutely essential for the task of keeping and renewing the Christian faith.

So, in light of this, I’ve gathered together on this page everything substantive that John Wesley said about the Bible. I have not attempted to “tone down” or alter any of his opinions — though I have updated the language in the first quote. My goal here has been completeness.

Yes, there is some room for argument about what he may have meant by some of these remarks — of course. And, I certainly wouldn’t say the man was in any way infallible.

But, here is what he actually said. END_OF_DOCUMENT_TOKEN_TO_BE_REPLACED