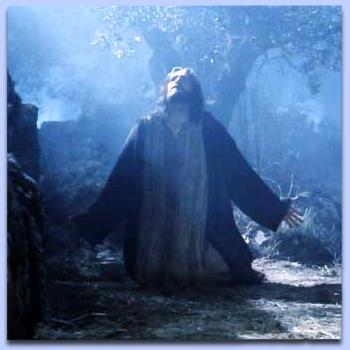 “Then Jesus went with his disciples to a place called Gethsemane, and he said to them, ‘Sit here while I go over there and pray.’ He took Peter and the two eons of Zebedee along with him, and he began to be sorrowful and troubled. Then he said to them, ‘My soul is overwhelmed with sorrow to the point of death. Stay here and keep watch with me. Going a little farther, he fell with his face to the ground and prayed, ‘My Father, if it is possible, may this cup be taken from me. Yet not as I will, but as you will.'” — Matthew 26:36-39 (NIV)

There is something mysterious about Jesus’ struggle in the Garden of Gethsemane. There was a depth of suffering there that is impossible to imagine. In the gospel of Luke we are told that while he prayed “his sweat was like drops of blood falling to the ground.” (Luke 22:44 N1V). It is hard to conceive how one we know of as the Son of God could be in such emotional torment. He says to his closest followers: “My soul is overwhelmed with sorrow to the point of death.” There is something incomprehensible about the sorrow of the Savior. Like the disciples, we observe the scene of Gethsemane, as it were, at a distance. There is something here into which we cannot enter. It is beyond us. 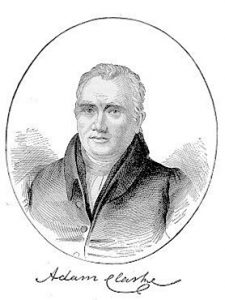 In fact, the suffering of Christ in Gethsemane so impressed the great early Methodist Bible commentator Adam Clarke that thought the major part of Christ’s work of redemption was finished in Gethsemane. Is this so? Was redemption practically accomplished before Jesus even came to the Cross? No, I do not think that is reading this passage correctly. At Gethsemane Jesus could, at least, still fall down and pray, “My Father ….,” On the Cross, he cried out: “My God, my God, why have you forsaken me?” The darkness of the Cross is even deeper than the darkness of Gethsemane. But, I can understand why Clarke would feel this way as he read the Gospel accounts of Gethsemane.

It appears to be true, just the same, that it was in the garden that Jesus began to feel the burden of atonement for sin with oppressive intensity.

And, Jesus was alone. No one shared the burden with him. His nearest disciples fell asleep while he was praying. This was the first taste of the alone-ness he experienced in his final hours. As time had gone by Jesus had become more and more alone. The crowds had long since ceased to listen to his plain teaching. He had to teach them in parables. And, even Jesus’ disciples did not understand him. Among the twelve also was a betrayer. In the end — just before the resurrection — Jesus cause would be abandoned by almost all.

There is an old hymn that says:

“‘Tis midnight and on Olive’s brow,
The star is dimmed that lately shown,
‘Tis midnight in the garden now,
The suffering Savior prays alone.

“‘Tis midnight, and from all removed
The Savior wrestles lone with fears
E’en that disciple whom He loved
Heeds not his Master’s grief and tears.”

In the garden Jesus prayed alone. No one else shared his suffering in the moments before the Cross. No one else really understood. So, in that sense, too, Jesus was alone. He was profoundly alone.

Knowing what he had to face, he sought out the place of prayer. More than anything else, he needed to seek his Father. To see Jesus praying in the garden of Gethsemane is to have our belief in the power or prayer renewed. Look at the importance he attached to it. And, see what strength he found in that time of prayer.

Jesus came into the garden sorrowful. He came out with a sense of confidence, determination and power . He has spent hours in the agonizing struggle of prayer. But, when his prayer was done, the issue was decided. The struggle was over. in the garden, Jesus weighed the suffering of the Cross against the good that it would accomplish fur us — and love won out. Here he determined to reach out and take hold of the cup of suffering that had been appointed for him — and drink it to the last.

Gethsemane reminds us of the Cross. It impresses upon our minds the greatness of the sacrifice Christ made for us. For, we see here the horror Jesus felt in facing the Cross.

But, it also points us to the strength that Jesus found in prayer. We see the encouragement and strength he found there.

Jesus has gone ahead. He has cleared the way for us. He has opened the door of prayer for us by the giving of his life. So, we also now enter into God’s presence. We offer ourselves and our need before God. Jesus has given his life for us. And, he has given us his example. He calls us to follow.